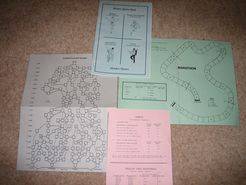 Marathon was originally published by Minden Games as part of the Minden Sports Quad, 1991. It was republished in Counter Magazine Issue 6, August, 1999. Marathon is a simple game based on one of the most imposing athletic events of all. Playable solitaire or against others, the object of the game is to complete the course in the fastest possible time. To reach this goal, players seek to utilize their cards in the best way possible in order to maximize their speed and endurance. The game includes a map of the race course and rules. A token or marker, score pad and pencil, and a standard 52-card deck are needed for play. When playing with more than three players, two decks are required. The rules include several advanced options including designing your own course and designing your own runner.