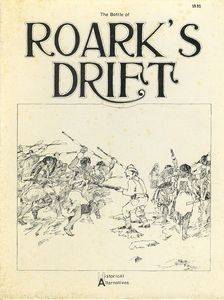 This game on the defensive stand of British soldiers immortalized by the movie "Zulu" has become notorious for misspelling the name of the battle as its title. Each counter represents one British soldier or five Zulus. The Zulu player may launch four attacks against Rorke's Drift, at which time the game ends. Special rules include the burning hospital, Surgeon Major Reynolds performing surgery in the storeroom, and Zulu rifle fire from the Oskarberg heights. Counters = 540 (includes blanks)