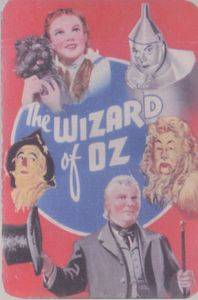 The Wizard of Oz Card Game This card game was produced by Castell Brothers, Ltd. (Pepys brand), of London in 1940 to tie in with the release of the MGM film in Great Britain. The deck originally included an instruction leaflet and forty-four playing cards which, when aligned sequentially, provided a visual account of the famous story. The Cards in this game feature scenes from the film story of Dorothy and her chums on their journey along The Yellow Brick Road to the Emerald City. There are 44 cards in all, in 4 suits and the game is played in a similar fashion to whist, though with penalty cards and a points tally to decide the winner. The box proudly proclaims ‘Full of Adventure’, ‘Endless Amusement’, ‘British Manufacture’ and ‘Mirth &amp; Magic’!! The Trade Descriptions Act wasn’t in force then! London: Castell Brothers, Ltd., 1940.