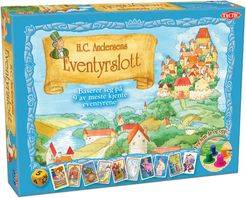 A game that includes 9 well-known fairy tales by famous story-teller Hans Christian Andersen. Everyone is familiar with fairy tales such as The Ugly Duckling, The Emperor’s New Clothes and The Princess on the Pea. In this game you move your high hat around the game board and collect 4 cards relating to one of the fairy tales. The task is not as easy as it sounds: as in all fairy tales, also this game contains a witch! Adding to the excitement are the special squares, such as tunnels that lead you to the other side of the game board, while the Lucky Galosh and the Joker cards will speed you up. The player who is the first to collect all 4 cards and return to the Fairy Tale Castle wins the game! Made under licence from Duckling Games.