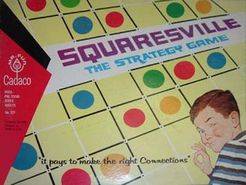 1968 Squaresville strategy game from Cadaco. Components: - 200 wood markers, - 200 wood playing pieces called sticks (to form the edges of the boxes) - 1 Game board with a grid of 10x10 boxes Object The object of the game is to score the most points. There are 14 squares with gold centers that score double points. so the whole 10x10 board is worth 114 points. Play The play is basic Dots and Boxes. The first player marks an box edge with a stick and if he completes any boxes he marks those as his, and he gets another move. If no box is formed, then play passes to the other player. Variations on Basic Game of Dots and Boxes Some squares are marked so as count as double points The plastic board has some of the box edges permanently marked. (Presumably this is to prevent any mirroring strategy.) Ages Pre-teens, teens and adults.