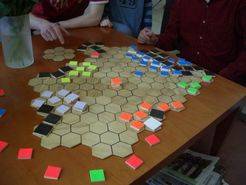 This game was invented at the Technical University Twente in The Netherlands. Atlantis is very original in its mechanisms. The board is built up from segments, each consisting of 7 hexes: one in the middle and six around it. The board can be made quite large, but is usually something like 4x4 segments; the game takes longer as the board gets larger. Each player has pieces of a single color. Pieces can be stacked, but when the stack gets as high as, or higher than, the number of neighbouring hexes, it explodes, spreading one piece to each surrounding hex and destroying the original field. If all seven hexes of a segment have been destroyed, the segment is removed. Thus, during the course of a game the board (Atlantis) disappears into the waves. The goal of the game is to conquer as many free hexes as possible. An area is conquered if it is only touched by hexes without enemy-pieces (compare Go). But beware: Exploding hexes have the nasty tendency to turn into an unstoppable front of explosion and destruction. As far as I know this game has not been released commercially, but nevertheless it has a large playing community, since the University Game Club (Fanaat) has now more than one generation of offspring players. The game plays best with 2, 3 or 6 players, for symmetry reasons. 4 players is possible, but since the board is not mirror-symmetric the players will not have equivalent starting positions.