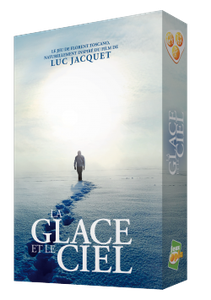 La Glace et le Ciel is a cooperative game for 2 to 4 players, lasting for about 20 minutes. Players will really depend on each other (no one can lead the party) and that there will be tension crescendo during the part... Just be aware that it will be a question of balance between the elements of water (hydrosphere), the Earth (lithosphere) and Air (atmosphere), as well as the Biosphere at the intersection of all three. Mix independently each of the 3 decks of 12 playing cards (1st, 2nd and 3rd generation) and place them on the table, face down. There are 4 cards sea, 4 land and 4 Air for each generation.Found on the 4 cards of each of these elements a value of Biosphere equal to 0, 1, 2 or 3. Have the 6 benchmarks and 3 starting game cards in the middle of the table. Mix the 6 objectives cards and 6 Biosphere objectives cards, into 2 piles, facedown on the table. Place over your Earth 4 cards ice decreasing values into a pile (the top 3 and 0 at the bottom). Place the 4 sky cards next to them. Evenly distribute to all players 12 cards of the 1st generation. Each player then takes an objective card and a Biosphere card Players will play each their turn in a clockwise direction. On their turn, the player must put one of his cards where they want, provided that the level of the element (Air at the top, Earth in the middle and Water at the bottom). As long as there are still empty spaces on the line of an element, they must be filled, as the next card will be laid over the cards already in place. A player can never move a card that has already been placed, however they may cover it with another card. As soon as the placing of a card completes the goal of one or more players, or on the contrary destroys their goal, it is revealed. These are the only clues that are given! When the 12 cards of the first generation are played, players reveal their Objective cards and points are scored. We look if there is=f there is a Co2 card in the ice returning as many ice cards as there are CO2 cards visible. Then we look at the sky level: you add up the number of unbalanced objective cards and subtracting the number of those out of balance to obtain the score. The 2nd sky card with the same value to observe the evolution of the CO2 in the sky. The philosophy of the game was very largely inspired by the book by Claude Lorius: Voyage dans l'Anthropocène.