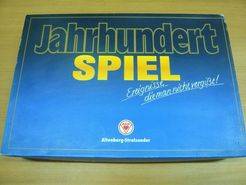 Jahrhundert-Spiel(translates to "Century-Game") is a simple trivia game about the 20th century. The game has about 30-35 question cards for each decade of the 20th century, each listing 4 questions. The game master, who doesn't participate in the game, takes a card for each decade and reads out one of the questions. The first player to answer gets a chip for that decade. The first player to answer a question for every decade wins the game. The last two chips a player needs may be replaced with joker chips, which he can earn by answering questions about decades for which he already has a chip. A player may not earn more than 2 joker chips.