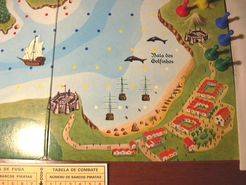 Abordagem - Pirates, Privateers and Carracks filled with gold. (Carracks were the first proper ocean-going ships in Europe; large enough to be stable in heavy seas, and roomy enough to carry provisions for long voyages. They were the ships in which the Spanish and Portuguese explored the world in the 15th and 16th centuries) All the thrills of XVII century sea navigation. The players must safely pilot three Carracks from the "Dolphins Bay" to the "Rocks Port", choosing their path through perilous waters filled with pirates and outrunning the other players privateers.