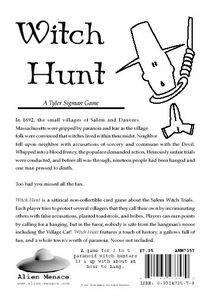 Witch Hunt is a light-hearted look at the Salem Witch Trials which occurred in Salem and Danvers, Massachusetts in 1693. Players take the part of paranoid villagers bent on accusing their townsmates of heinous acts of witchcraft while protecting themselves from similar accusations. Accusations damage a villager's Reputation, and whenever a witch trial is called, the villager with the lowest Reputation hangs. The player who called for the witch trial gets points for hanging his opponents' villagers, but beware--sometimes a trial will cause your own villager to be hanged, in which case you lose points. Witch Hunt features frivolous accusations, valiant defenses, last-minute escapes from the gallows, and of course--the Village Cat.