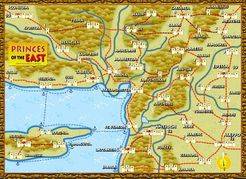 From the publisher's website: Princes of the East is a political/military game of the period immediately after the first crusade. Each nation strives for supremacy. Only the strongest, most cunning, will leave a legacy of stability and survival for his people. This game can be played face-to-face or by mail/e-mail. Included are the rules, counters, sheets which allow control of a state, individual named leaders for use as councilors or as generals, tables, expenditure charts and a map of Southern Asia Minor and Northern Syria. The game begins in the winter of 1100-1101. Each turn represent a season or part of a season. Players write their turns activities, first expenditures and skulduggery, then for movement and combat. Each winter, taxes are collected and trade deals are made. Any alliances must be thought out carefully, as once trade deals are organized, they can be broken at any time, but not renegotiated until winter. A state can only run efficiently with an efficient civil service. A player must choose councilors, promoting or dismissing them as the situation requires. Religious leaders, First Citizens, Leading Nobles, and Chief Advisors are real enough, however, and have their own allies and enemies. Attempt to throw out a popular one or keep an unpopular one, and you risk a revolt which could see you killed by the mob. Troops of all types are available. Native troops are inexpensive, but few. Mercenaries are plentiful, but expensive. They are listed by the names they are called by contemporaries; Light Horse are called Skyths by the Byzantines, Turcomen by Muslims, Turcopoles by Christians. Alan Light Horse are also available to Byzantines. There is no qualitative difference. The same goes for Cavalry; you have Ghulams and Cataphracts. Always note the image rather than the name. You'll get used to it. This is a web-published game that is free to download and play.