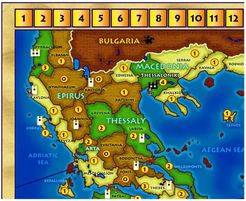 From the publisher's website: "In the Shadow of Byzantium" puts you at the head of a principality struggling to survive and overpower your neighbors. Judicious use of slender finances to create armies, alliances and acts treachery is essential to victory. Bind other princes to you with marriage alliances to gain a breathing space to perhaps build fortifications to protect your land. Who dares truly wins in this game of big chances and big payoffs, but the winner of today could easily be the loser tomorrow..... The game can go up to twenty turns, but thanks to our variable game termination rules, the last turn could be anytime between turns 12 and 20, thus making it virtually impossible for the "gang up on the leader" syndrome to ruin everyones fun. One player is rarely so far ahead that they become the target of other players anyway. The players to choose from: The Empire of Constantinople The Nicean Empire The Duchy of Athens The Principality of Achaea The Despotate of Epiros The Kingdom of Thessalonika The Venetians of Crete (Lords of the Archipelago) In the Shadow of Byzantium can be played with up to seven players. A four player game takes about 2 hours to play. There is very little set up and almost no record keeping (just treasury- big deal!). We had so much fun playing this game first time out we believe it is destined to be one of our most popular products ever. It is a fast paced nail-biter where the victor is in doubt until the last turn. This is a web-published game that is free to download and play.