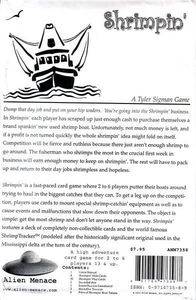 Shrimpin’ is a fast-paced card game for 2-6 players who are tired of their dreary day jobs and wish to head South and take up this glitzy, lucrative trade. Each player has scraped up just enough cash to purchase themselves a brand spankin’ new used shrimpin’ boat. Unfortunately, not much money is left, and if a profit is not turned quickly, then the whole shrimpin&amp;#039; idea might fold on itself. As luck would have it, all players have congregated in the same small stretch of Louisiana coastline. Competition will be fierce and ruthless because there just aren’t enough shrimp to go around. The player who shrimps the most in this crucial first week in business will earn enough money to stay around. The rest have to pack up and return to their day jobs shrimpless and hopeless. To Shrimp, players move their boat to choice shrimpin&amp;#039; holes to shrimp while also playing cards to augment their catching ability, such as improved nets or Shrimp Findin&amp;#039; Com-Pewters. In addition, players may use cards to foil their opponents&amp;#039; plans, such as capsizing waves or mechanical failures. The object of the game is to catch the most shrimp over a 3, 5, or 7 day period (choose game length).