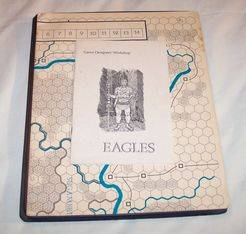 Subtitled "Rome on the Rhine Frontier, AD 15", Eagles is about a Roman invasion of Germanic tribal lands in the eponymous year and their attempt to re-capture three "Eagles" (legion standards) taken from a Roman army that the German barbarians defeated six years prior. The Romans, under Drusus Germanicus, must fight against twelve Germanic tribes, led by Arminius. The Romans are very powerful, but few in number. They are aided by a large number of auxiliaries and Germanic tribal allies, all unreliable in combat. The Germans are many, but need to be "motivated" by Arminius in order to join battle against the Romans. A fairly even match that historically went to the Romans. 380 counters Revised version: Caesar's Legions