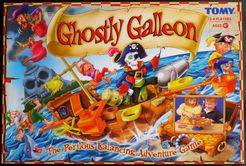 Ghostly Galleon is a simple childrens roll-and-move (spin-and-move?) game with an added element of dexterity. The game consists of a plastic pirate ship on a tilted rotating base, a spinner, four shipmates (the player pieces), and a heavyweight Ghost Pirate. The ship contains a quantity of beads which shift around like an unstable cargo, and there are various pivoted fittings (mast, plank etc). There is also a loose rolling barrel on the deck which trips various traps as it rolls around. Essentially a roll and move game, the shipmates start the game in a 'raft' and move onto the first of the 17 numbered spaces on the ship. Some spaces are more precarious than others, especially the mast and pivoted traps. Half of the numbers printed on the spinner have a 'ghost' symbol which enables the player to also move the Ghost Pirate onto any of the marked larger spaces, thus causing the entire ship to rotate and pitching any unlucky players back into the sea, where they have to start over (unless they've got past space 9, whereas they can return to space 9 instead). The winner is the first person to get to space 17 (the treasure) by spinning the exact number to get there.