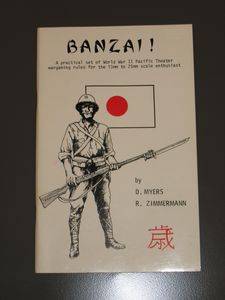 From the cover of the rule book: "A practical set of World War II Pacific Theater wargaming rules for the 15mm to 25mm scale enthusiast." This is a set of rules for the Pacific Campaign. It is a standalone game with Japanese, United Kingdom and US Vehicle, Weapon and Organizational tables in the same format as Angriff. It was published in 1976 between the Third printing of Angriff in 1974 and the Fourth printing of Angriff in 1978. If you have played Angriff, you will be able to play Banzai. Banzai adds Jungle fighting, amphibious assaults, Naval bombardment, snipers and ambush optional rules. You do not need Angriff to play Banzai, although there are rules in Angriff that could be applied in this theatre of operations but would most likely not what Pacific fighting was known for (like urban fighting)