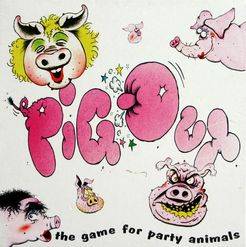 PIG OUT is a party game in which players take a pig character (including Burnt out Boaris the drunken lout, Lady Gammon Steak a toffee nosed sow ...) and place them at the start which is at the center of a playing board that spirals outwards to the finish. Players move from start to finish, based on dice rolls attempting to collect a total of six donuts on the way. Donuts are earned on pink squares through successfully answering a "Squealer" question. Each card provides a subject and a number (5 Bad Habits, 6 Pizza Toppings etc.) which the player must "name". Failure to complete the task earns players a penalty in the form of a Pig Out card. The other coloured squares - blue, green and yellow involve the initiation of three different types of word games (memory, connections and opposites) that all players participate in until one of the players slips up and is punished by being awarded a Pig Out card. Whenever a player fails to complete a task then he/she draws a Pig Out card and follows the instructions - which normally result in some kind of forfeit. The first player to get to the "Home" space with 6 donuts, having survived the hazards arising from the Pig Outs, is the winner.