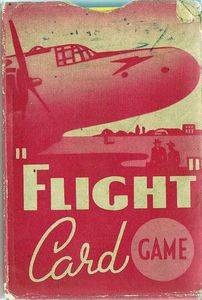 The theme is air travel along four Imperial air routes. Each route comprises an aircraft card and five destination cards valued sequentially from one to five points . For example the yellow route starts with a Douglas Skymaster card and then in order: Tripoli; Khartoum; Kisumu; Johannesburg and Durban. All routes end with a ‘Safe Landing’ card valued at six points. A player may play a destination card on any route, but in sequence. Routes can be interrupted with ‘Fog’ and ‘Customs’ cards. These in turn can be canceled by respectively: ‘Alternative Route’ and ‘Passport’ cards. The game ends when the first ‘Safe Landing’ card is played. Points are then awarded for playing the ‘Safe Landing’ card. Points are also awarded for having been the first player to play all of their cards. Points are deducted for cards still held at the game end. The rules suggest playing a number of games, the winner being the first player to score a hundred points.