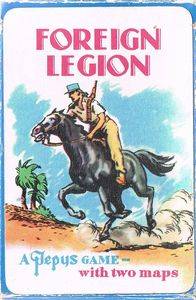 Players are Foreign Legion agents, each with a mission to locate and secretly observe the clandestine preparations for war of rebels in the fictional sheikdom of As Q’Ara. There are two maps of the place, each made up of four cards with “grid references” for the locations of the various activities of the rebels. In game terms the object is to collect and display a number,of ‘Mission’ cards. The deck comprises twenty-six of these with points values ranging from fifty to five-hundred. There are also eight ‘Unsuccessful Search’ cards to be played in accordance with the location rules for mission cards. These score no points, but count towards the target number of cards. There are also two ‘Spy’ cards in the deck. These are also played in accordance with the location rules, do not count towards the target total of cards, but double the value of all mission cards already exposed by a player. As soon as one player has laid the required number of mission cards, the player with the highest points total on their displayed cards is the winner. The rules suggest playing a number of games to an agreed target score.