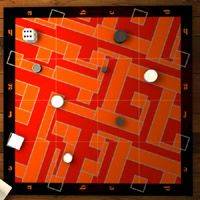 Krabcek - a game of skill and chance. The board is a labyrinth made from sixteen tiles, which are rearranged for every game (there are over 8 million variations). Each player has seven round playing pieces: 4 Skinnyboys (the smallest), 2 Middlemen (medium size) and 1 Bigboy (the largest). Play takes place on pathways, moving pieces from box to box on the throw of a dice. Play doesn’t stop at the edge of the board. Leave at the right side and you come back at the same place on the left side. Leave the path at the top, and you come back on at the same place at the bottom. Each piece may only move through those paths in the labyrinth that are wide enough for it. There are three tower combinations (stacking): a little stack is a Skinnyboy on a Middleman, a big stack is a Middleman on a Bigboy, a Krabcek is a Skinnyboy on a Middleman on a Bigboy. The object of the game is: •To make a three-piece tower OR •To block your opponent so that he cannot move