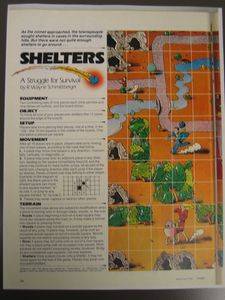 Published in GAMES Magazine March/April 1982 issue, page 54, as a game inspired by "Conspirators," an 18th-century French game in which the loser is the player owning the piece that becomes "odd man out." Players take turns moving their pieces (people) out of the city into surrounding caves . . . but there are fewer caves than people... you get the picture. From GAMES Magazine: "As the comet approached, the townspeople sought shelters in caves in the surrounding hills. But there were not quite enough shelters to go around . . ."