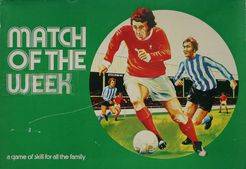 MATCH OF THE WEEK is a boardgame based on the game of Soccer and uses a simplified version of the actual rules used for Association Football. Any number of players may participate but the playing pieces represent two teams of 11 (10 field players and a goalkeeper), as in Soccer. Teams take it in turns to move their players and the ball. The movement of players and the ball is determined by the roll of two D6 in the colours of the two teams (blue and red). Either one playing piece, or a combination of pieces are moved forwards, backwards, sideways and diagonally the number of spaces corresponding to the score on the dice of the colour of that player's team. After the players have been moved the ball is then moved (assuming that a players piece is next to it) the number of spaces shown on the combination of both dice. The flight of the ball is affected by the direction in which it is "kicked" and the presence of friendly or opposing players in its flight path. Particular rules apply to the kick off, kicking the ball in the air, dribbling, free kicks, penalties, throw-ins, goal kicks and corners. Even the infamous offside rule is included. To score a goal, the player must kick the ball across the goal line between the two posts. The winning player (team) is the one that scores the greatest number of goals with in a pre-agreed time limit, or is the first to reach a pre-agreed number of goals.