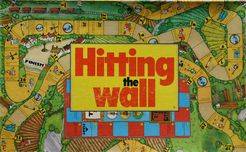 HITTING THE WALL is a simple roll and move boardgame with the theme of running the Marathon. The board is divided into three parts - an outer training circuit - the Marathon course - The "Wall" Players have one playing piece which is used on the training circuit and Marathon course, and a counter which is used when they "Hit the Wall". Each player is also provided with a training schedule on which their training progress is recorded. Players start the game by undertaking training which is conducted on the training circuit. They complete one lap of the training circuit, based on the results of dice rolls. The type of square landed on (e.g. hill training, training injury, new shoes etc..) is recorded on the training record, so that by the time that training is completed players will have had differing experiences as a result of their training. Once all players have completed their training the Marathon race itself commences. Play progresses one throw at a time with penalties being dictated by the square on which the piece lands. Some penalties apply to all players, others only if the penalty is applicable to one of the events experienced during training (e.g. "Into the wall for injury" would only apply to a player who had been injured during training.) Once the penalty is spent the training incident is canceled on the training record. Many of the penalties involve "hitting the wall" - that part of the Marathon where running becomes particularly difficult and you wonder whether it is all worthwhile. In the game this represented by having to complete a circuit of the 20 space "wall". The main playing pieces remains where it is on the Marathon circuit and the other counter is used to mark progress around the wall. Once the wall has been overcome the player may continue moving the runner on the Marathon track. The wall can be beaten by doing a complete circuit of the 20 spaces or by sacrificing any combination of two benefits (20 milers, hill training, drinks station) earned during the training session. The winner is the first player to reach the finish of the Marathon.