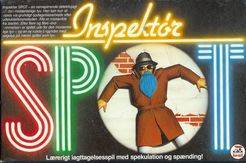 Memory game with a twist. One player plays the thief, while the rest are detectives. The thief draws 3 out of 8 clothes cards, while the remaining 5 are put back in the box. 56 pictures of the possible thief are put out face up on the table. Each picture is identified by three different pieces of clothes. The detectives takes turns to pick a picture and the thief has to admit how many correct clothes are on the picture. First detective to pick the correct picture scores one point. The game consists of several rounds until each player has played thief. The played with the most points at that time wins, and can call himself Inspector Spot. In case of a draw the number of cards used will be used as a tiebreaker.