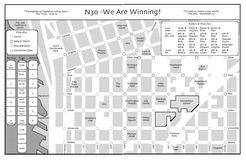 By 1999, a broad coalition of labor, environmental, anti-corporate and anti-imperial groups united against the World Trade Organization. Left-liberal groups, led by the American Federation of Labor - Congress of Industrial Organizations and the People for Fair Trade - Network Opposed to the World Trade Organization, planned to rally and march, and to petition the governments for reforms, on November 30th. More radical groups, coalescing around the Direct Action Network and the Seattle Anarchist Response, planned to shut down the opening ceremonies, also on November 30th. N30 portrays the morning blockades and the afternoon confrontations of November 30th. Two players represent the opposing sides; one represents the protesters; the other represents the police, with their incident commanders, Asst. Chief Ed Joiner and Captain Jim Pugel. Each turn represents one hour. Each bloc represents either about 50 police or 50 to 100 direct action protesters, prepared for confrontations. Each crowd represents 500 to 1000 other protesters, unprepared for confrontations.