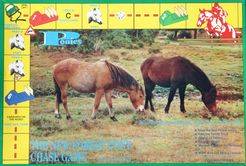 Ponies - The New Forest Pony Chase Game From the Box: "Ponies", as it is popularly called in our family, was invented heres (Sway) in the New Forest in about 1985 to keep our children quiet on wet days. Firstly we wanted an interesting game for younger children that was not contentious and would not end in arguments and tears. "Ponies" was based upon a drive in the New Forest, taking the routes to our favorite walks. Players had to collect the Ponies found on the road, and get ten back to their Corral, avoiding the usual hazards of Forest roads. Then, finding that we adults also wanted to play, we made it more interesting with scope for an element of low adult cunning. Enter the Verderer and Game Licenses; and "Ponies" was born in its current form. The game is ruled by the throw of dice, but the Chase Cards introduce scope for planning and strategy and generate suspense and excitement. The lucky early leader rarely wins, and the ultimate winner has to run the gauntlet of determined Verderers so that often it is the last throw of the dice which decides the victor between three or four neck and neck contenders. My family and all our friends have been playing it ever since, both adults and children have remained addicted over the years. Bowing eventually to everyone's enthusiasm we have at last decided to go public with "Ponies": we are certain you are going to become as ardent Verderers as the rest of us!"