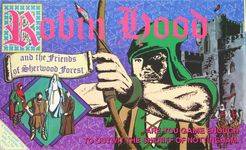 想玩 拥有
Robin Hood and the Friends of Sherwood Forest

"You are Robin Hood and your friends Will Scarlet, Maid Marian, Little John and Friar Tuck have been captured by the evil Sheriff of Nottingham and taken to his castle. You must rescue them and steal some of the Sheriff's treasures and return to Sherwood Forest. The first player back wins the game". During his turn a player has two goes: In the first part of his turn the player throws the dice and moves the piece representing the Sheriff of Nottingham. The aim of this is to attempt to capture your opponents' pieces by landing on the square that they occupy. If this happens then the captured player loses one of his rescued friends or treasures and has to go back to the start. The second throw of the dice allows a player to move his own piece (Robin Hood). The aim is to reach the green squares in order to rescue his friends. On landing on a green square with an exact throw of the dice a player may collect a "Robin Hood" card which reveals the friend or treasure that you have found. To win the game you have to be the first player to visit the green Robin Hood squares, rescued all of your four friends, stolen some treasure, and returned to the start square.