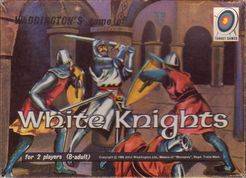 The game is set in the hall of the Red Knight. At one end of the hall are his treasure chests, guarded by six red knights. The three white knights try to force their way through the hall to reach the treasure. Game contents: Playing board, 6 red knights, 3 white knights, 1 dice. In play the knights are moved by the dice throw. They can only move orthogonally, must move the full number of spaces shown by the dice roll, and may not reverse direction. White moves one knight on his turn, red moves two (both the full distance given by the dice roll). If a knight is moved adjacent to an enemy knight he attacks him. Combat is resolved using the dice, with white knights adding two to their dice roll. If two white knights reach the treasure then white wins.