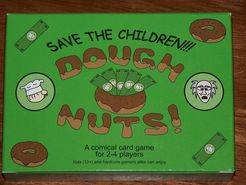 From the publisher's website: The Evil Mad Scientist has kidnapped a bus load of children, and unless his demands are met they will be plunged over the side of a cliff! This is where you come in - the President has called on the greatest doughnut bakers in the world. Get out there and bake the largest pile of dough nuts the world has ever seen so when the bus falls it will have a soft landing. Will you and your fellow bakers be able to create a pile large enough to cushion the bus's deadly plunge? Will The Evil Mad Scientist get away with it? Can you beat out the other bakers and establish economic dominance over them when the dust settles (that is, get rich in the process)? Will you be able to SAVE THE CHILDREN?!? In Dough Nuts! you take on the role of one of the premiere doughnut bakers in the world. If the players are able to amass a common pile of 100 doughnuts before time runs out, the children are saved and the baker with the most money wins. Beware, though - if there's even one single errant doughnut, the children will plunge to a horrible burning death and all the players lose. You wouldn't want that, now would you? Dough Nuts! is a comical card/strategy game for 2 to 4 players, comprised of 121 beautifully illustrated cards.