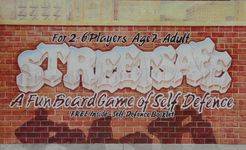 STREETSAFE is designed by Trevor Roberts, a former British Ju Jitsu Champion. It was developed to teach people how to be safe on the street. The aim of the game is to visit four places in the city (determined by a deal of "destination cards") whilst avoiding dangerous areas such as dark alley or parks. Prior to commencing their journey players may elect to undertake training in the martial arts thereby providing them with a better chance of defining themselves against any dangers that they may come across during that journey. When they decide to start players move around the game board as the result of a roll of a D6. On landing on a "Risk" square a card is drawn and the instructions on that card followed (i.e. go back 4 spaces, go to the nearest "Streetwise" space...). On landing on a "Streetwise" space a card is drawn which presents the player with a scenario such as being faced by one man with a large stick. The player then has the option of running away (normally the best course of action) or staying. The results of the encounter are determined by the choice made and the level of self-defense training achieved by the player. The first player to visit his/her four destinations and return the the Bus Depot (start) is the winner.