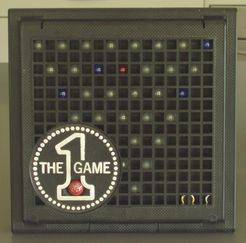 An abstract strategy game for two players involving a triangular (equilateral) board that has positions for 36 balls, or marbles. i.e., one row each of 1, 2, 3, ... and 8 balls. The game contains 42 silver balls, 8 blue balls and 1 red ball, but only 36 of these are used in each game. A cleverly designed box/board with sliding panel makes setup a breeze as well as randomizing the initial set up. Players take turns removing any number of consecutive balls along a single horizontal line, as long is there is no gap or red ball between them. The removed balls are discarded into the large hole and underneath the slider, which stops them going astray and gets them ready for the next game. The red ball can only be taken on its own. Any row containing red can only be taken up to the red. A blue ball allows players to take up to, or part of, three entire rows radiating from that blue. Other blues in the path are treated as regular silver balls. The player with the last ball loses.