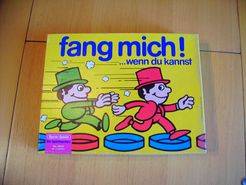 This game has nothing in common with the 2004 "Catch Me!". Translated roughly from Synes Ernst's description on the Spiel des Jahres site: "Catch me! ... if you can" is an exciting mixture of memory and chasing game. This makes the uncomplicated, shrewd game of Oded Berman a genuine family game, where children have the same chances as adults. The goal of the game is to overtake, and thus remove from the running, the pieces of fellow players. Who remains at the last is the winner. One moves on a round track, formed at the beginning of the game by 24 disks. The speed at which a piece advances is determined by numbers and symbols on the bottom of the disks. One must remember thus where which disk is. Catch me! ... if you can: In this unique game the board is made up of cards with numbers on one side &amp; a rabbit on the other. After shuffling &amp; arranging these in a circle, rabbit side up, the players rabbits are placed at random &amp; players must remember the position of cards as they are turned over &amp; what is on each. The last remaining rabbit is the winner.