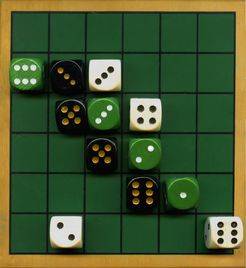 Hof, at its most basic, is a 4-in-a-row game for two or three players, on a 6x6 board, using coloured dice as playing pieces. At its most complex it becomes a game in which players use identical sets of dice that all need to be manoeuvred into a sequential row, using the eyes to determine movement range. At the start, players roll their own colour dice (6 in a two player game, 4 in a three player one). Then, in turn, players position these dice on an empty board space, one by one, and never altering the face value. When a player manages to create a horizontal, vertical, or diagonal row of 4 own dice, that player wins the round. The victor scores the total pip count of these dice, or the best dice string if the created row exceeds its required length. When all dice are on the board, and no row has been completed, players may move one own die per turn to an adjacent space, but not diagonally. The aim is to score the most points over a given number of rounds. Anyone vaguely familiar with placement games won't find this much of a challenge, and for these players a couple of trickier variant rules are suggested. Any combination of these variants can be used, to eliminate randomness and increase complexity as desired. - (2 player only:) to win, a row of 5 or even 6 is needed. - players don't start by throwing the dice, but use identical sets instead (1-6 or 1-4). - a winning row also needs to have the dice in the correct sequence, low to high. - dice may be moved as many squares as their face value, allowing directional changes too. The designer isn't credited, but in all likelihood it is Hans-Jörg Nürnberger, as Hanje was the vehicle for Hans-Jörg and Ursula Nürnberger's own designs. PUBLICATION HISTORY: 1975 Hof Hanje Spiele-Atelier - out of print As with some other Hanje games, the small box is made out of wood, and the board is printed on its lid. Game seems to be part of the family called "Miniplays". There are 10 games numbered from 1 to 10 and two games with no number. HOF is one of the not numbered ones. ADDITIONAL INFO: language skill needed: language neutral. It comes with German rules. english translation: none, but the above description should help. awards won: none.