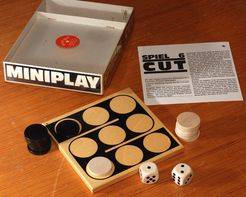 Cut is played on a 9-space track. Players enter pieces by dice throw at opposite ends and try to bear them off at the opponent's end. Friendly pieces landing on each other stack and then move together; an piece landing on an opposing piece or stack sends the latter back to the beginning. In a variant the loser of a round loses all pieces remaining on the board for the next round, and rounds are played until only one player has a piece left. Unusually, the box is made of wood, and the board is printed on the lid. CUT is game No. 6 (of at least 12) in a family called "Miniplays".