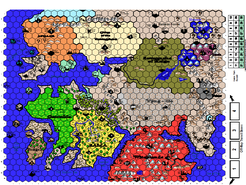 Starting in 1997, Glenn Rahman designed an extension to his fabulous game Divine Right. Scarlet Empire took place in a different period in that game's world, and further to the south of the original map. It was designed as a stand alone game that could also be played in combination with the other one. The campaign game pits most of the players against the one playing the Scarlet Witch King. If you liked Divine Right, you'd like Scarlet Empire -- everything that made the first game great is also present in the other. Mercenaries, special locations, diplomacy, magic, etc. Scarlet Empire was supposed to be published by Excalibre Games and made it as far as the advanced play-test stages, but the publisher hemmed and hawed and tried to cut costs, so much so Glen eventually gave up in disgust. A very few play-test copies are in existence as a result. Expands: Divine Right