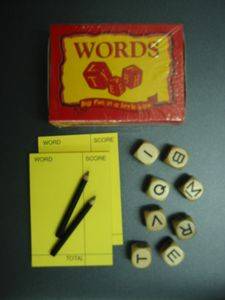 Words is a game in the 'big fun in a little box' series by Tobar Ltd. Like other games in the series, it comes in a large matchbox-like container and has nice miniature scoring pads and pencils. The main equipment are eight six-sided dice with a single letter on each face (3 of the dice have one blank face). From the instructions: "Words (any number of players) The game is played over a number of rounds and each round needs to be timed. Usually one minute per round is adequate but this can be shortened / extended if preferred. Players take it in turns to throw the eight dice. When the dice have stopped rolling, the round begins. The object is to make as many words, of three letters or more, as possible, from the other letters thrown. Letters can only be used once per word. Blanks can be any letter from word to word. Pronouns and plurals are not allowed. Players write the words constructed onto the score pad provided and at the end of each round, the score is calculated and added to each player's cumulative total. Points are scored as follows: 3 letter word - 1 point 4 letter word - 2 points 5 letter word - 3 points 6 letter word - 5 points 7 letter word - 7 points 8 letter word - 10 points The winner is the first player to score 100 points, or whatever other total is pre-agreed by the participating players."