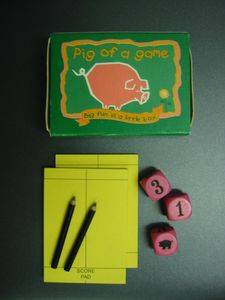 Pig of a game is a game in the 'big fun in a little box' series by Tobar Ltd. Like other games in the series, it comes in a large matchbox-like container and has nice miniature scoring pads and pencils. The main equipment are three pink six-sided dice, with the numerals 1,3,4,5,6 and a pig on the sides. like other members of the Pig family of dice games, it has a push-your-luck game mechanism. From the instructions: Pig of a game (2 or more players) Before the game begins, each player throws one die once. The player throwing the highest number (pig = nil) begins the game. The first player throws all three pig dice and adds the score on each face to produce a total for that throw. The player can then keep that score and pass the dice on to the next player or throw the dice again. This process can continue until a winning score is accumulated. BUT if one pig is thrown, the round finishes and the total accumulated in preceding throws is added to the player's total. If two pigs are thrown, the round finishes and any score accumulated in the same round and prior to the offending throw is wiped out. If three pigs are thrown, the round finishes and any score accumulated in this and any previous round is wiped out. The winner is the first player to attain a total of 101."