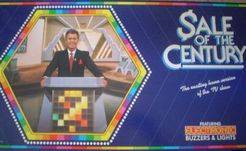 Based on the game show, players are asked general knowledge questions and race to come up with the right answer. Right answers win money, wrong ones lose it. At several points throughout the game, players are offered the chance to buy discounted merchandise using the money they have built up. The catch is that no player knows just how valuable the item is, only that it is offered at less than full value. After fifteen questions, the player with the most money can either buy a more expensive prize with their winnings, or keep their money in hopes of winning again, and being able to buy something even better. After each person has had a chance to host, the player with the most money and merchandise is the winner. Two editions were made of the original 1969-74 series, although the first was reprinted (in 1971?) with an altered cover: one prize was changed to a TV, and the set shot cuts off the left side (where the host is) in favor of another prize. Re-implemented by: Sale of the Century Quizzard