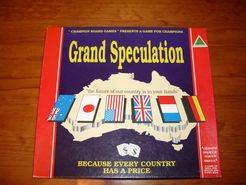 In the words of the designer: "This is speculation on a grand scale where the future of Australia hinges on a takeover race between the Financial Superpowers of the World." 6 nations are represented - Australia, Japan, USA, UK, France and Germany. Regardless of the number of players, one player (the best player) must be the "Australian Master Player." Your aim is to take over Australia by buying up its riches and portfolios such as Iron &amp; Steel, Major Banks and Government. Once you have accumulated enough wealth, you can pay the Grand Takeover Price to financially rule Australia. The game comes with toy money in various million and billion dollar denominations. There are Stake counters (small shares) for each nation, and Supergrabs (giant shares). The board is mounted and represents the various portfolios you are trying to take over.Movement is controlled through the roll of 2 dice. There is also a Speculation deck, much like a Monopoly chance deck. Each player also gets a Kangaroo piece to move around the board.