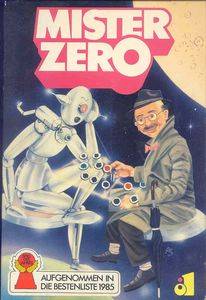 The board shows a network of roads, in the middle a character - Mr. Zero. Each player has his own goal space and ten chips numbered from 0 to 9 with which to influence the path that Mr. Zero takes. They take turns placing chips on the roads. When all of the chips have been placed, the decisionmaking part of the game for the players is over and that of Mr. Zero begins. Each time he comes to an intersection, he always follows the road having the lowest-numbered chip. This chip is now flipped over. If by the end Mr. Zero reaches a goal space, a player receives all of the inverted chips. The player with the most chips wins.