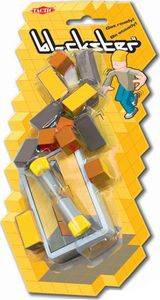 In this fast-paced game, you are supposed to build the Blockster tower as high as possible, without knocking it over. The hourglass shows how much time you have to place the block shown on the card. If the tower is still standing after you have placed your blocks, play passes to the next player who now has to extend the tower in the same way. Special cards add extra difficult situations. For example, you might have to drop your block on top of the last placed block, or to switch a block already in the tower with another block. The player that knocks the tower over loses the round, and everybody else gets a marker. First player to collect 5 markers wins the game and becomes Blockster master. Ages 6 and up