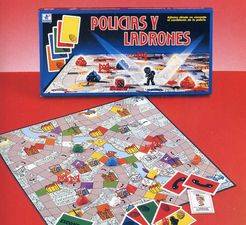 Object: To be the first squad Car to catch Slippery Sid. The notorious criminal Slippery Sid has escaped from Jail and is hiding somewhere in the City. Hunted by Police, he is on the move from one hideout to another. You have a Police Squad car and you must try and trap Slippery Sid on one of his hideouts before he escapes to another. The playing area represents the street plan of the City: these are 25 colored sites where Slippery Sid may be hiding. The arrows on the road indicate one-way streets and the telephone handsets mark the places where you can get a radio message from Police Headquarters. Some of the radio messages will give you clues about Slippery Sid's hideout.