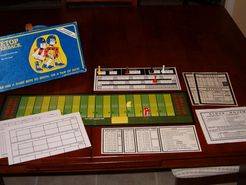 From the Developers: "This game was developed to fill a need in the sports game market. Our goal was to develop a realistic football game that could be played anywhere in a relatively short time by almost anybody. Yes there are some very realistic games out there, but they are too complicated for a lot of people to play, such as a father and a son. Other games are simpler, but they leave out the drama and agony of tough calls (go for it or punt?). We feel we have met our goals with Tabletop Quarterback. You can play a game and keep full statistics in less than an hour. Some of the "experts" who developed this game have been trounced by wives and 11 year old kids. We think youl like it and get caught up in the action just like we have." Overview: Basic football rules apply; things like 4 tries to make 10 yards, 6 points for a touchdown, 3 points for a field goal. The risks are here: such as the probability of making a long field goal, an unexpected turnover, a drive-killing penalty. Usually, sound football savvy will get you through. But don't be afraid to make some chancey calls as they can work and really turn a game around. Call play, both players roll dice, compare results to chart. Repeat as indicated by rules. Game is over after 4 quarters.