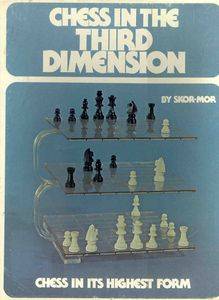 Chess In The 3rd Dimension offers a challenge not to be found in standard chess games. Here, you play in three dimensions instead of two. Consequently, each player must "see" the game in terms of left and right, forward and back, as well as vertical up and down, as though the men on the field are suspended along three planes of space. You must be wary, as should your opponent, of being attacked from either above or below, as well as the other two dimensions.' This chess game differs from a regular chess game in that it has three transparent boards stacked on top of each other. One player will start with his pieces on the top board, the other will have his pieces on the bottom board. After their initial move, a piece automatically moves to the middle plane (with a few exceptions: a king or rook may remain on the same plane, as can a piece needed to prevent checkmate). From there on, each player can make a regular move or ascent or descent a single level (moving to the same square on a different level). When moving up or down, it is not possible to capture opposing pieces.