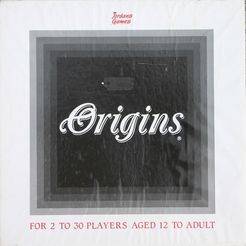 Origins is a trivia based board game with the theme being the origins of sayings, names, traditions, expressions, people etc.. The playing board is comprised of 25 squares in a 5 x 5 grid. Each square is further subdivided into 4 quadrants. The squares are colour coded by colour and number so that a throw of the two dice (one numbered, one coloured) will indicate a particular square. Taking it in turns players throw the dice and are asked a question determined by the colour of the square. Questions are in five categories (Blue - Language, Purple - First, Red - People and Places, Yellow - Names, Green - Words). Each player has a choice of three answers, only one of which is correct. If a player correctly answers the question one of his or her playing pieces is placed on one of the quadrants within the square relating to that question. The same player then continues with another roll of the dice and another question, until a question is answered incorrectly at which point play passes to the next player. The first player to roll the dice and correctly answer questions to achieve at least one scoring piece in 5 squares forming a line either up, across or diagonally is the winner. Though named the same and on the same subject matter, it is unclear if this is the same game as Origins, as the games appear to have different question and game-board styles.