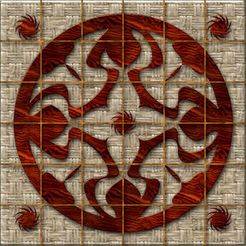 From the Border Games website: Using 36 six-sided dice and a six-by-six board (several nice boards are available on the website), the players take turns moving the dice around the board. When a die lands on another, the two dice compete by rolling, high die winning the battle. Play continues until only one die is left on the board. Each player adds up the values on his dice - the highest total wins the game. Several variants are also available on the website.