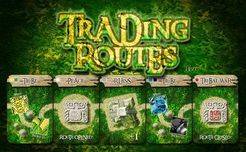 The South American Jungles are just bursting with little native tribes that aren't quite self-sufficient, but definitely quite up to being taking advantage of! That's where you come in! You've just appointed yourself to do a little bartering on their behalf by connecting tribes based on what they produce and what they need. If you can get the last tribe on a route to produce what the first tribe on a route needs, the route will be completed and become yours! Naturally there's a whole bunch of other greedy players trying to compete for the same routes and they'll do anything from thrown in a few ancient ruins to boost the value of a route to starting and stopping tribal wars! TRADING ROUTES is another card game in Van der Veer Games' QuickPlay DBGC (Don't Busta Grey Cell!) series.