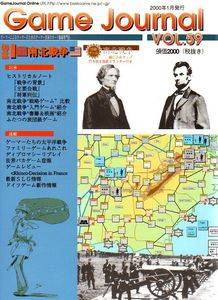 Published in the Old Game Journal #59. Map is about 13 x 20 inches and comes with 180 counters. Just starting learning this one but initial impressions are quite favorable. Covers the entire war in about a 4 hour sitting. A melding of Victory Games Civil War and GMT's For the People but far faster and, remarkably, at least at first glance, not missing anything. Has production, leaders (dismissal and promotion), naval rules (river fleets, invasions and blockades), Neutral States and cards for player chosen events (Emancipation and Trent to name just 2 of the 32 choices in the game). Chit pull system that is pretty novel and a first rate combat system. More later as I get this completely translated, play tested and analyzed but looks to be first rate game in a playable format. Sort of a House Divided type game with all the goodies added but not at the expense of more playing time.