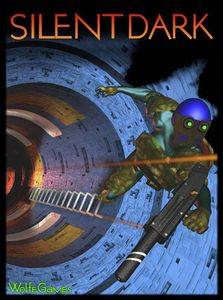 Silent Dark is a tabletop miniatures wargame, set in the relatively near future of the 26th Century. The game is designed for the 25mm figure scale, but because it has been designed with the revolutionary G.U.T.S. Core Rules©, it could easily be adapted to 6mm, 15mm, or the 35mm figure scales... or anything else for that matter. Before we describe the game's features, and offer the traditional list, let us take a brief moment to describe the G.U.T.S. Core Rules©. G.U.T.S. stands for “Generic Universal Tactical System”. It is a revolutionary new game design, because it uses new models to create accuracy of simulation without adding dreary layers of useless rules. G.U.T.S. can be used for all sorts of miniatures-based games, such as WWI, the Civil War, and other conflicts, past and present. It has some other advantages, though, that are specific to Silent Dark: Design your armies from the ground up. Every Creature, Vehicle and Weapon can be designed to your exact specifications, down to the last rifle in the last man’s hands. Freedom rules! Availability: Originally a commercial product, Wolfe Games has released Silent Dark as a free download in PDF format. The entire Silent Dark package is available from the publisher's website.