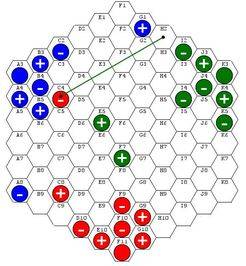 From the website : Phwar (short for Phase War) is an abstract game of war for two or three players. The board is a hexagonal grid of hexagons. Each player owns four negative particles (electrons), four positive particles (positrons) and one neutral particle with zero charge (neutron). The game is won by the last remaining player. All of a player's particles are removed if they do not have at least one electron, one positron, and one neutron on the board. Players take turns moving one of their particles in any of the six hexagonal directions. The particle can move any number of cells in an unobstructed line. There is no passing unless a player has no legal moves. An opponent's particle can be captured by replacement if: the victim is in line of sight of at least two of the current player's particles; and the total charge of all particles in the victim's line of sight cancels out to zero. The idea is that such systems are unstable, but reach equilibrium after the capture. It is compulsory to capture an opponent's particle if possible. The capture may be performed by any of the current player's particles in line of sight of the victim. The neutron may participate in a capture but contributes zero to the total charge. Online Play Super Duper Games